In 2021 and 2022, the Commission on Congregational Mission took on the Social Justice issue of “Racism in the church.” The Commission members decided to educate and inform themselves by reading several books that were recommended by ABCUSA and by Region staff. Commission members did some of that reading and reported back to the Commission to help contribute to this educational process. The following reviews are the fruit of that labor. The Commission wishes to share them with all churches in the hope that they might spark action and reflection appropriate to this cause.

No Innocent Bystanders: Becoming an Ally in the Struggle for Justice by Shannon Craigo-Snell and Christopher Doucot 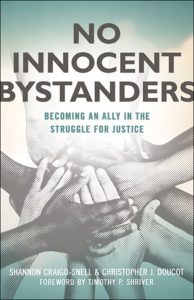 First, a couple of helpful definitions:

Social Justice:  The view that everyone deserves equal economic, political and social rights and opportunities.

Racism: A belief or doctrine that inherent differences among the various human racial groups determine cultural or individual achievement usually involving the idea that one race is superior and has the right to dominate others or that a particular racial group is inferior to the others.

The book that I selected for review was “No Innocent Bystanders: Becoming an Ally in the Struggle for Justice” by Shannon Craigo-Snell and Christopher Doucot.

A bystander is a person who is present when something happens and who sees it but does not take part in it.

If churches have a disconnect between the Teaching of God’s word and the Practice of Racial & Gender Justice, this introductory type book may be a good place to begin the necessary tough conversations within a congregation. But talking religion and living religion are two different actions. Conversations are good, but “walking a mile in somebody else’s shoes” could make all the difference in the world. As a Viet Nam Veteran, I truly know what “boots on the ground” means! The writers want the reader to understand the struggles for LGBTQ Equality and Racial Justice.

First of all, the practical layout of this book is written like a small-group study guide. There are short chapters followed by discussion questions. The writers selected Racism and anti-LGBTQ oppression as sins that require repentance, reparation, and God’s grace to repair these kind of issues. It is within that framework that the authors covered some of the basics of Racism and Homophobia (a dislike of or prejudice against, the Gay community [LGBTQ]).

In March 2022, Republican Gov. Ron DeSantis (Florida) has signed a bill which bans “classroom discussion about sexual orientation or gender.” The bill has been referred to the “Don’t Say Gay” bill. Other states are following Florida’s lead.

Secondly, “Getting Ready to Become an Ally” in that struggle for Justice laid upon the selected sector of the LGBTQ community for this book.  An Ally is one who is acting on behalf of others in the pursuit of helping to end whatever type of oppression, might exist. This goal can be accomplished by educating others, being a voice for others, being a sponsor for others or being a mentor for others. Every Christian ought to be an Ally!

Thirdly, the author sets out several “Resources for Being an Ally” one might need to carry out this assignment by considering the words of the Apostle Paul: “And now abideth faith, hope, charity (love) these three; but the greatest of these is charity (love)” (1 Corinthians 13:13).  “For God SO loved the world…” (John 3:16).

Finally, some “Concrete Steps” are provided in order to carry out the mission. A number of individual leaders share some of their lifetime experiences to shed light on a number of actions they successfully took along their journey in times like these.

Above all, as the body of Christ, as an Ally, let us study, teach and live out God’s word directly and through His prophets of old.

“If my people, which are called by my Name, shall humble themselves and pray, and seek my face, and turn from their wicked ways: then will I hear from heaven, and will forgive their sin, and will heal their land.” (2 Chronicles 7:14)

“The grass withereth, the flower fadeth: but the word of our God, shall stand for ever.” (Isaiah 40:8)

“As we have therefore opportunity, let us do good to all men, especially unto them, who are of the household, of faith.” (Galatians 6:10)

As a child of God , an ally in the struggle for justice, I am reminded of the lyric from a favorite songwriter:

“If I can help somebody as I pass along, If I can cheer somebody with a word or song, If I can show somebody he is traveling wrong; Then my living, shall not, be in vain.” 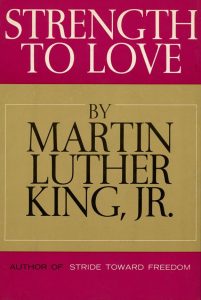 Strength to Love is a book by Martin Luther King Jr. It was published in 1963 as a collection of his sermons written during a time when he felt war, economics, and racial inequality threatened the survival of humanity. Dr King strongly believed in the mutuality of humankind. What affects one person either directly or indirectly affects all others. This belief in the interdependence of life led him to seek methods of social change which dignified the humanity of the advocate and adversary. In his preface Dr King wrote that he had misgivings about publishing his sermons.  He believed that a sermon was meant to be heard, directed toward the listening ear rather than toward the reading eye. He said he rewrote his sermons with the eye in mind. His words touch the heart just as if they had been spoken instead of read.

Dr King writes throughout this work that Love transforms with redemptive power. It has the power to unify the individual’s spirit and life’s human adversaries. But Love is not easy. It requires strength drawn from God’s love. The power of God’s love allows us to align what we say with what we do. In Dr. King’s vision of the Beloved community, justice exists for the oppressed and the oppressor. He believed that God’s transformative love was the best means for our country’s redemption and reconciliation

The Cross and the Lynching Tree by James Cone 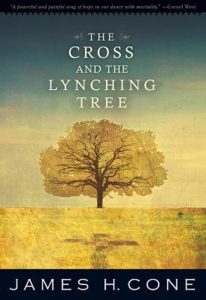 This book is about black liberation theology. The author points out the parallels between Christ’s crucifixion on the Cross and the lynching tree used as a tool of White supremacy to instill submission and fear in black people during the Jim Crow era. He examines how black and white Christians see the cross through different lenses. Understanding comes from striving to see the lens of the other.

The author also addresses those who believe that lynchings were a part of a shameful episode in American history that is best forgotten.  He writes that the hatred, indifference, and denial that validated lychings for many white Christians had not disappeared in 1969. Recent episodes during the Trump administration demonstrate that the hatred, indifference, and denial still lingers into the 21st century. Silence has not been and is still not an agent of change.

In a summary of our perceptions of the book’s content we determined that the cross is a symbol of comfort and compassion within the context of our individual needs. Racially in America our needs are different. However this divide can be breached as we seek to learn from one another while valuing our common humanity. This necessitates that our churches become safe places for discussion and discernment on racial issues.