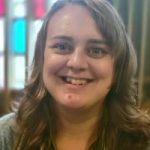 Mindi was born in Oregon but raised in Alaska. A fifth generation American Baptist Minister, she grew up in Church of the Covenant in Palmer, Alaska, a small American Baptist congregation. Mindi attended Linfield College (now Linfield University) in McMinnville, Oregon, receiving a B.A. in Creative Writing in 1999. During her time at Linfield, she studied abroad in Nottingham, England. After graduating college, she flew across the country to attend Andover Newton Theological School in Newton, Massachusetts where she graduated with her M.Div in 2002 and began serving First Baptist Church in Newton as the Associate Minister for Christian Education. Mindi was ordained in 2003, and soon after, she met Rev. JC Mitchell, then a seminary student at Andover Newton, and they were married in 2005.

Mindi’s call to pastoral ministry became clear when she was called to First Baptist Church in Framingham, Massachusetts in 2006 as their Senior Pastor. While in Framingham, Mindi and JC welcomed their son AJ two months after JC’s ordination into the Christian Church (Disciples of Christ). When JC was called to serve a church in southern Oklahoma, Mindi served as a hospital chaplain for two years. In 2012, they moved to the Seattle area where Mindi became the Senior Minister of Burien Community Church, and while JC served another congregation, together they planted Open Gathering, a church community committed to disability inclusion and justice. During Rev. Mindi’s time as staff for the Evergreen region, she felt a call to regional ministry, and the Spirit was at work in bringing her to Wisconsin.

Mindi and her family live in Brookfield. She enjoys reading and writing science fiction and fantasy, having published a short story, and is working on publishing a science fiction novel. She has also written for Judson’s Journeys Bible Study Curriculum, the American Baptist Quarterly, The Christian Citizen, and other publications. Mindi also plays guitar (good enough for background music at a party or youth group songs), enjoys road trips, and exploring the outdoors. 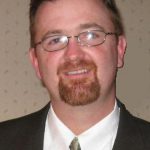 From January 1, 2021 to February 28, 2022, Dr. John A. Jones IV serves as Interim Regional Executive Minister for the American Baptist Churches of Wisconsin.  He was originally appointed as Associate Regional Minister-Education, effective January 1, 2017.  This appointment included responsibilities of the Site Coordinator of CENTRAL Wisconsin CBTS, inclusive of the Hispanic Lay Institute and the Korean-Language program that met at the Elm Grove offices.  Prior to assuming this position, John has taught classes at CENTRAL since 2008.

Originally from the south, John grew up in Georgia, graduating with a B.A. from Mercer University in Christianity, Psychology, and Greek in 1991. He enjoyed a year at Regents Park College of Oxford University in England before pursuing the M.Div. degree at the Baptist House of Studies of Duke Divinity School in North Carolina where he graduated in 1995. Soon thereafter he received ordination through his home church Shirley Hills Baptist Church in Warner Robins, Georgia. In 2017 he received ABC recognition of that ordination through the Commission on Ministry. From 1995-1996, he served as pastor of Crystal Hill Southern Baptist Church in Virginia before moving back to Georgia to be with his father after the passing of his mother from cancer.

In Georgia, he taught middle school mathematics, coached softball and soccer, served as youth pastor at a local congregation, and prepared to continue studies in theology and ethics.  In 1999, John moved to Milwaukee to begin a doctoral program at Marquette University.  He successfully defended his dissertation, The Costly Witness of the Church in 2006.  Prior to that defense as well as in the time since, he has had the opportunity to teach as an adjunct instructor at various local schools including Marquette University, Lakeland College, Cardinal Stritch University, Mount Mary University, Viterbo University, Carthage College, and CENTRAL Wisconsin seminary.

In 2008 he had the good fortune of marrying Katherine Valentyn.  They have two daughters, Martha and Alicia, who teach them valuable lessons daily, helping them be better parents and better people by providing both laughter and challenge.  The family is involved in the congregational lives of both First Baptist Church of West Allis and St. Benedict the Moor in Milwaukee.  John very much enjoys cooking for the family and trying to do some running. During summer holidays you can sometimes find the family camping in one of the wonderful Wisconsin State Parks. 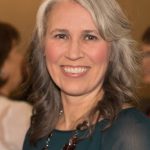 Rev. Carolyn Dugan brings the above scripture to mind as she is appointed to this position for Camp Tamarack and serving the Region of ABC-WI.  From 2012-2020, Carolyn was the part time Camp Director and then the full time ARM-Camping where she worked with many different staff members, volunteers, renters and campers. Camp has been a part of Carolyn's life even before she was born and she started attending when she was in 5th grade, that led to volunteering in several areas until she was brought on staff in 2012.

Carolyn grew up in Wisconsin with most of her younger years in Monroe where she played tennis and basketball, graduating as a Cheesemaker. She attended one semester of college at Sioux Falls and graduated with a BS Zoology from UW-Oshkosh. She then spent almost 20 years working for Covance Labs as a technician, supervisor and manager in several different departments. She is back working at Covance by LabCorp as a Training Development Specialist for Toxicology. One focus area is leadership development.

Carolyn attended CENTRAL at the Region Office and through on line learning, graduating in 2016 with her Master of Divinity. During this time she also worked as the Christian Education Director for The Federated Church of Green Lake.  In the fall of 2016, Carolyn celebrated her ordination with the support of the Region and The Federated Church.

Carolyn lives in Randolph with her husband Jim and many different animals on their 5 acre farmette. They have one daughter, Emma, who is studying astrophysics at Michigan State University. Carolyn loves being active and you can find her doing a workout, walking the dog, kayaking, playing tennis, coaching volleyball or reading a great sci-fi book. 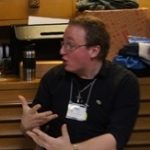 A long-term Wisconsinite Sean (who grew up in Brookfield) has earned two master's degrees: the first (MA-TS) from Asbury Theological Seminary just outside Lexington Kentucky, and the second (STM) from Nashotah House Theological Seminary near Delafield, Wisconsin. Ordained in the Anglican tradition, Sean has served (in addition to his previous work here at ABC-WI) in pastoral and community care ministries; most recently as the Director of Senior Community Care in Emmanuel Community United Methodist Church in Menomonee Falls.

Sean’s passions in ministry are worship (particularly celebrating the sacraments and preaching) and the development of the Christian life in both active service and in inner spiritual growth. In returning to work as our Office Administrator, Sean is seeking to make the tools and help of the national American Baptist Church agencies and the connections of our neighbor congregations and ministries here in Wisconsin available to everyone through facilitating connections, information, and relationships through the ABC-WI Regional Office and its ministry.